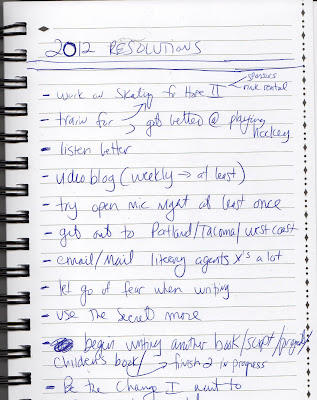 Well, I made it. Another year and another 365 blog posts. Just like my t-shirt blog, I had a lot of help with this one. Many people scanned for me, emailed me scans, and gave me (this year and in years past) a lot of the items that I scanned. Thank you to my family and friends who helped me and all of my 2011 projects like this blog and Skating for Hope – I couldn’t have done them without you!

I hope at the very minimum people enjoyed at least one of these scan blogs. And I hope both this blog and last year’s blog show at least one person that if you put your mind to it and promise yourself to do something, it’s possible. Here are some of the things I’m going to do for 2012. The end got cut off, but it says: “Be the change I want to see in the world” (from the Gandhi quote). I also forgot to add starting the website I’ve been working on, but that will come soon enough!

Thank for reading, and I hope you check out my video blog for next year! Happy 2012!

Into the Wild DVD 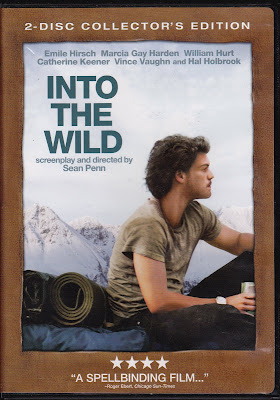 Okay, I’ll admit it. I didn’t sift through any piles to dig something up for today’s scan. I still have a lot to choose from, and didn’t have time to pick. I was heading out for the weekend and packed this DVD to maybe watch with my friends. With the New Year coming, I welcome inspiration. And the story of Christopher McCandless inspires me.

If you haven’t checked out the Into the Wild book, movie, or soundtrack,I highly recommend. It’s a story that teaches us what the most important things in life are. (Hint: It’s not the stuff we own) The soundtrack by Eddie Vedder is almost as inspirational as McCanless’ courageous journey. 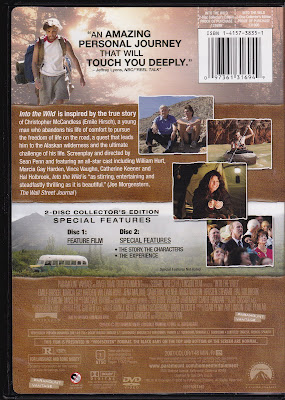 Posted by Dave McGrath at 9:27 PM No comments:

I’m pretty happy and excited right now, because I just submitted my first e-book to Amazon for publication. It’s my latest volume of poetry titled (you guessed it) Blue Star Poems, and this is the cover I came up with in about 2 seconds (can you tell?). If you want to know where I got the idea for the title, you’ll have to ask me. It should be available for download (only cost ya a buck!) in the next day or two – I’ll keep you posted! 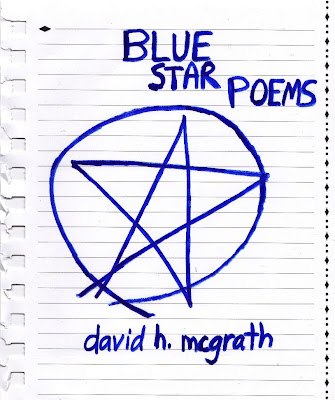 Posted by Dave McGrath at 8:11 PM No comments: 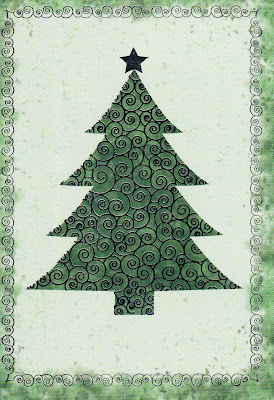 I wrote before how I thought that homemade gifts were the best ones. Well, one like this is a very close second. When I read this card, there was a huge smile on my face – someone helping Hope Lodge is a gift to me and anyone who has stayed there. If you’ve been thinking about it, you can read more about Hope Lodge here and (if so inspired) make a donation here. Thank you to my awesome friends who made this donation and to all who support the Lodge! 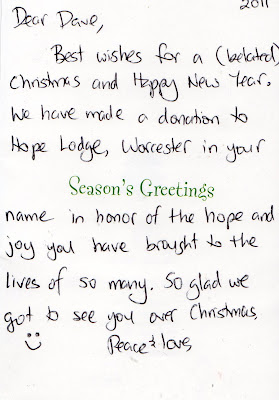 Posted by Dave McGrath at 4:29 PM No comments:

Regardless of if it’s Christmas, a birthday, or any other time of the year; the true gifts in life are the people you have in yours. I am really lucky to have my friend Andy in mine. It’s hard to believe we have known each other for (ugh) over 20 years, but math doesn’t lie. Pictures don’t lie, either. We may look a lot younger in these shots, but the smiles and having fun hasn’t changed one bit (The tightness of the jeans and curve of the hat’s brim have been altered since).

Of course, Andy and I have shared more serious moments too. There was the time in college he bailed me out of a drunken beat-down and went back on the T to Harvard wearing a t-shirt stained with my blood. There were visits to the hospital and talking about our traumatic experiences with each other. And there were even times we did or said things that upset one another. But now, we look back and laugh at all of it.

Even though I only get to see Andy once or twice a year, our connection and friendship remains strong and picks up right where it left off. Looking forward to spending some time with him and his family tonight! 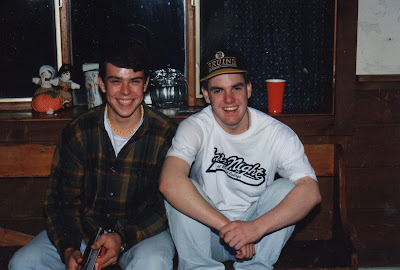 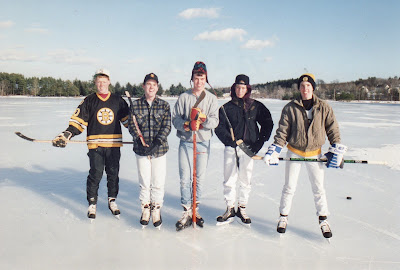 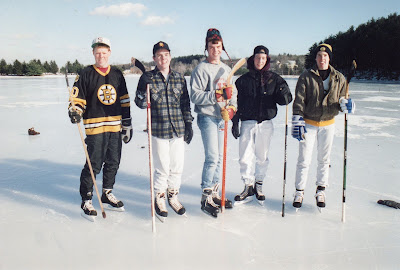 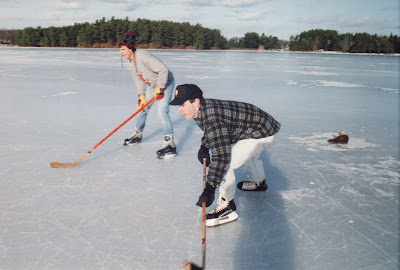 Posted by Dave McGrath at 3:07 PM No comments: 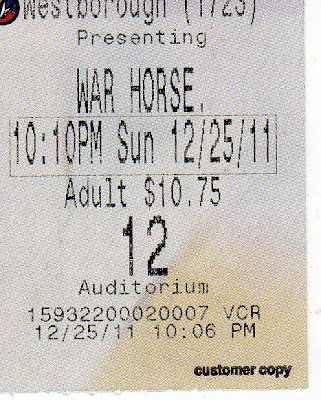 Starting in 1998 with Patch Adams, my sister had the idea of starting a tradition of going to see a movie on Christmas night. I will add the other tickets here if I find them, but for right now I will just write about last night’s feature.

War Horse was 2 ½ hours long, but went by much more quickly – a sure sign of a great movie. Based on a play of the same name, it (not surprisingly) tells the story of a horse that makes its way through World War I.

Like every war movie I’ve ever seen, it had me wondering why we can’t figure out our differences without fighting – the scene when two soldiers helped the horse out of barbed wire was my favorite.

The best part about War Horse was that is showed the horrors of war without spattering the screen with blood and gore. It was a very touching story about love, loss, and believing in destiny. More Christmas movies to come… 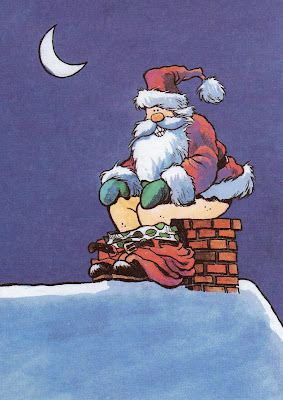 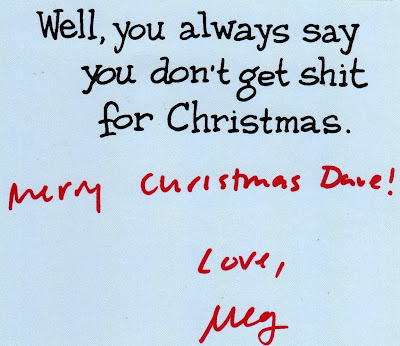 Leave it to my sister to pick out cards appropriate for me. Just like the Reindeer Eating Beans card she got me before, I think this one may also refer to my Crohn’s Disease. Whatever the reason, I think it’s hilarious.

In addition to making me an awesome Bruins Stanley Cup present with the sports page and decopage (and proving again that the best gifts are made), JB also gave me this artwork from The Boston Sports Company.

It was another great Christmas at the McGrath house full of smiles and laughs. Everyone is healthy and happy, and you can’t ask for more than that! Hope everyone had a very merry day! 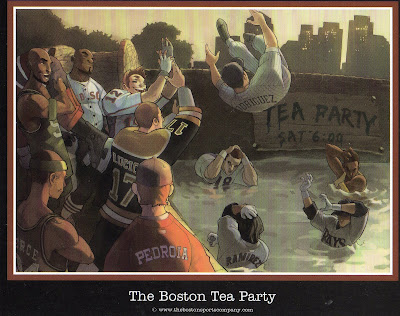 Posted by Dave McGrath at 6:14 PM No comments: